Paragala Island- Palm Bay – Coral Bay
We left Paragala Island with only a small day sail in mind, but the wind
was not favoured for this direction so we decided to go further west
(closer to Darwin and better for the wind). As we came closer to the next
anchorage and zoomed in on the chart plotter, suddenly unsurveyed area
turned up on the screen. We decided to go further to an anchorage that we
got recommended from another cruiser 245 miles west. We arrived late the
next evening and it turned out to be very shallow, so we dropped the
anchor 1½ miles of the cost and turned in. Next morning we left early in
very quiet and nice conditions heading for an anchorage we found on the
chart outside a ranger station. On our way we crossed a big croc, and
after him a big catamaran who called us on the VHF "sailing vessel under
spinnaker this is Pharlab". He he we don't meet many cruiser out here and
we haven't seen one with spinnaker before. Because of all the downwind
sailing we were often run ours, then during the day we take down the main
sail and put up some sun protection over our boom. We spoke to Pharlab, an
Aussie that just had completed his Circumnavigation of Australia and
Tasmania. He told not to go to the Ranger station, but to Coral Bay at
Cobourg Peninsula. He had been there and he told us about a resort there
with nice burgers and cold drinks. After the Aussie we past a group of
very large see turtles. The resort turned out to be very nice. It is only
possible to go there by plane or boat, and we are the only guests here at
the moment. Today Michael (the manager of the resort) will drive us out to
Wanarij Point and drop us off so we can hike back. There are lots of
wallabies and very big black and red parrots here, more of all that later. 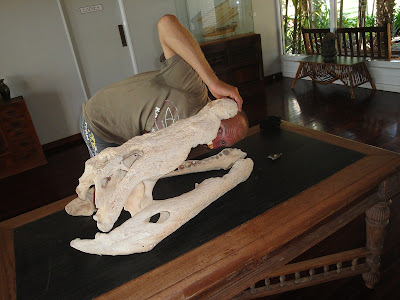